The archdeaconries that make up our diocese are now: Shyogwe (leaded by Arch Emmanuel GASANA; Ndiza (by Arch Joseph IYAKAREMYE) Hanika (by Arch Louis Pasteur) and Nyarugenge (by Arch Edward NYITURIKI). This (Edward) was officially inducted today Dec. 13 at Nyarugenge, Ruhango 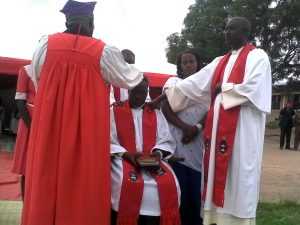 These ceremonies were attended by the presence of the Bishop of Shyogwe, Dr. Jered KALIMBA, of Archdeacons, pastors and many Christians from all over the diocese.

In his sermon the Bishop urged Christians in general and in particular arch Edward to maintain a strong relationship with God. The preaching was mainly centered on the prophecy of Habakkuk. The bishop also recalled that the service of God is noble but it is not easy. He also evoked that God’s servants deserve to be respected and honored. Nevertheless, God’s servants also need to know directly communicate with him because they are always confronted with several challenges. They must have strong faith in God (Habakkuk 2:4; Rom 1:17). They must also be up to watch over the flock (2.1) and pray regularly.