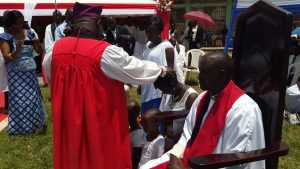 Today, March 13, 2016 Louis KABAYIZA was officially inducted as new archdeacon of Hanika. These ceremonies were marked by the presence of the Bishop of Shyogwe, Dr. Jered KALIMBA, Archdeacons, Pastors, Nyanza District leaders and many Christians from all over the diocese.

In his today’s sermon, the Bishop Jered focused on the Text from John 10.11-18: “11I am the good shepherd. The good shepherd lays down his life for the sheep. 12 The hired hand is not the shepherd and does not own the sheep. So when he sees the wolf coming, he abandons the sheep and runs away. Then the wolf attacks the flock and scatters it. 13 The man runs away because he is a hired hand and cares nothing for the sheep. 14 “I am the good shepherd; I know my sheep and my sheep know me–15 just as the Father knows me and I know the Father-and I lay down my life for the sheep. 16 I have other sheep that are not of this sheep pen. I must bring them also. They too will listen to my voice, and there shall be one flock and one shepherd. 17 The reason my Father loves me is that I lay down my life-only to take it up again. 18 No one takes it from me, but I lay it down of my own accord. I have authority to lay it down and authority to take it up again. This command I received from my Father.”

To serve others, someone must be called. There are three types of callings:

Are the Archdeacons that we have the servants in the real sense of the term? Some of them like to be big men! They like to work for their own wealth. But God needs us to help his people to fight Goliath. There are so many Goliath. Poverty itself is Goliath! Christians must be saved and riches. Jesus came to give us a full life (John 10.10): “The thief comes only to steal and kill and destroy; I have come that they may have life, and have it to the full.” 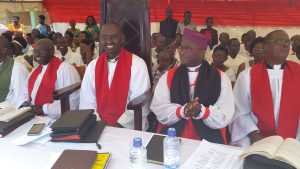 We don’t need to be pastors only in peaceful times: think about being a pastor in war, in genocide, etc. we don’t also need to be pastors for rich and good people only. The Pastor/Archdeacon receives all birds, all people! Everyone has his own role in the Church. Every part of the body prays a crucial role for its health. Let us go and find all God’s people and we are not alone as God provide with us with so many tools.